A Brief History of the Pierce Ryan and Annie B. Ryan Houses & Gardens

All the land around Humboldt Bay was originally the home of the Wiyot Tribe. We do not know the extend of use of this specific parcel by the original inhabitants of the area. There are no known archeological artifacts present.

The post indigenous history of this property goes back to the early years after the founding of Eureka. The first Ryan to settle in the area was James Talbot, who captained the second boat to enter Humboldt Bay in 1850. He is credited with establishing and naming Eureka, and in 1851, founding the first successful saw mill on the bay in partnership with James R. Duff, JT Ryan’s younger brother, Pierce Howard Ryan, came to Eureka in 1857. By then the lumber industry was well established and Pierce made his living in the supportive mercantile business. His business continued into the 20th century as Ryan Dry Goods Company.

By 1869 Pierce was sufficiently well off to build his home here on E Street, on a lot he had purchased in 1863. His home was a 2,700 square foot, two story, three bedroom dwelling, the foot print of which is memorialized in the rose garden and patio area. Pierce was an engaged citizen, who, among other things, helped organize the Eureka Volunteer Fire Depart, served on the Grand Jury, maintained “Ryan Hall” at 1st Street and E Street as a venue for meetings, dances, other social events and theater, and in the late 1870s and early 80s, he served in the State Senate, Pierce Ryan died in 1889.

In 1892, Pierce’s widow, Annie B. Ryan, built the two homes facing F Street to provide herself with rental income. They replaced two earlier modest dwellings on the same site. All three homes stayed in the family until 1959. In the 1950s and 60s, the trend in Eureka was to demolish many of the older homes in favor of “modernization.” In 1969 the Pierce Ryan home was burned as a fire department exercise.

In the 1970s, Caltrans proposed building a recessed freeway through Eureka, from approximately Washington and Broadway to 6th and Myrtle and on to the Eureka Slough Bridge, cutting a swath of almost 400 square blocks through town. Caltran brought up over 100 properties in the proposed right of way, including the Ryan property. Caltrans bought up over 100 properties in the prosed right-of-way, including the Ryan property. Some buildings were rented and others were abandoned. The sister house to what we now call the Annie B. Ryan House was rented to its current occupant in 1974. She was able to purchase it when Caltrans abandoned their plan. The Annie B. House has been vacant through the years and allowed to fall into disrepair and be vandalized. In 1993 the freeway plan was abandoned, and between 1996 and 2002 the Caltrans properties were sold.

From the mid 1990s to the present time, many people and organizations have worked to save this property as a public asset for historic, cultural, gardening and educational opportunities. Carol Green, the owner of the “sister house” was the prime mover in this effort. In later years, Ron and Melanie Kuhnel with the Ink People Center for the Arts have taken on the organizational aspects of this project. The College of the Redwoods and Eureka High ROP have taught numerous restoration classes here. These are just a few of the many individuals and organizations that helped save this house and continue helping by being volunteers.

The Eureka Heritage Society, the proud owners of this historic property, welcome you to become part of this ongoing effort at restorations by volunteering. 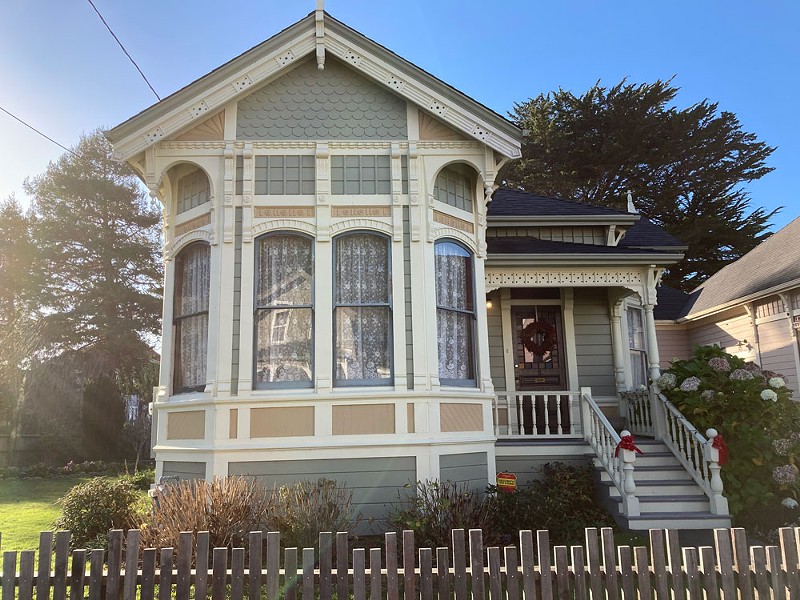