133 years, 4 locations and a future home with the Eureka Heritage Society

Similarities between the original Buhne fence location at 719 E Street and the Annie B. Ryan garden at 949 E Street are uncanny. Both face west within three blocks of each other on E Street and both had circular driveways with two entrances on E Street. The original Buhne site was 240 feet wide and the Annie B. Ryan property is 150 feet wide allowing extra fence material to use the best of the remaining Buhne fence which has suffered considerable neglect over 133 years of existence. 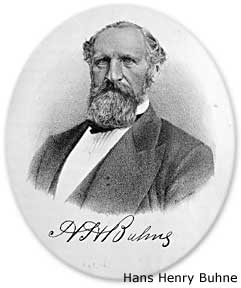 Hans Heinrich (Henry) Buhne was born on June 26, 1822 in Flensburg, Denmark and went to sea in 1838 at age sixteen. After many seafaring adventures he eventually became second mate on the Laura Virginia and piloted her across the bar into Humboldt on April 14, 1850 becoming the first ship into Humboldt Bay. Buhne decided to settle on Humboldt Bay and he became a bar pilot, rancher and merchant on and around the bay. Captain Buhne was so prosperous in his various ventures in Humboldt County by 1884, that he wanted to make a statement by building a new and substantial commercial structure at Second and G Streets in Eureka. By February 1884, the plans and specifications had been completed by San Francisco architects Kenitzer and Raun for this Renaissance Revival commercial building, the Buhne Block.

Captain Buhne also decided that he needed a home that better expressed his wealth and standing in the community. He decided to build it on his property located on E Street in Eureka between Seventh and Eighth Streets. He wanted a home on the scale of those owned by other top Eureka businessmen like William Carson, who was also planning construction of a new mansion in 1884. The Buhne mansion was built on a full 240 by 240 feet city block and the house measured 62 by 72 feet. With a basement and two full floors plus attic it came to a total of 13,392 square feet. The rooms had fourteen-foot ceilings and most of the woodwork was of imported Circassian walnut. A horseshoe-shaped driveway on E Street looped up to the front entrance.

Ornamental iron fences once introduced grand properties to the passersby. First brought to America from England during the colonial era, iron fences guarded only the finest houses, churches, and public buildings. The earliest American iron fences were wrought iron with a delicate lightweight quality. By the mid-1800s, cast-iron fences were made in foundries where molten metal was poured into molds patterned with plant or geometric shapes. Demand for cast-iron pieces peaked in the Victorian era, between 1860 and 1890. Because they could be mass-produced and then transported by train to almost anywhere in the country, durable cast-iron soon overtook wood as a preferred material for Fence ornament fences, particularly in cities, where security was a concern. They were typically painted black or dark green. And of course, Captain Buhne had to have a grand iron fence to impress passersby.

The Buhne fence first traveled via train from the foundry back east to Eureka in 1884 for installation along E Street in front of the mansion. There it stood until the mansion was demolished in 1955 after the last Buhne child, Georgie Buhne died in 1954. Thankfully the fence was not destroyed with the mansion, but moved to surround a house at 3403 R Street in Eureka behind Sequoia park where it stood for another 40 some years until March 1998 when it was purchased by Glenn and Gail Giaimo for their Victorian near Ferndale. Their plans changed and the fence was sold to Philip Burns who intended to install it around his 1880s Italianate house at 303 Clark Street in Eureka. Now he has changed plans. The Eureka Heritage Society is planning to purchase, restore and install the fence on the Annie B. Ryan property on E Street.