Article and photos by Kathy Dillon

It seems likely Harrison Mercer would be pleased. It was Mercer—founder of the still-thriving Mercer-Fraser general contractor and engineering company—for whom these houses were built. The first, the stately dark gray Dutch Colonial at 2635 H St., was constructed in 1904 as the prime residence of Mercer and his wife, Clara.

After a century of North Coast winters, the five houses stand with enduring, well-tended beauty. Here is one of the transcendent H Street scenarios that offer a glimpse of what life was like more than a century ago.

The others—three smaller, nearly identical Dutch Colonials and a Colonial Revival—were finished by 1905, the work done by A.C. Ackerman and crew. All but one was a rental: The house at 2607 H St. became the home of the owners’ son, Dr. Clarence Mercer, known is his own right as a respected, Eureka-born physician.

This block is a small sampling of Mercer’s legacy which stretches along H Street to greater Eureka, Humboldt County, and the Western United States.

Like that of many Eureka immigrants, Mercer’s life began in New Brunswick, Canada. He set sail for the North Coast in 1873, and here he soon began working as a builder for established pros like James Simpson and Benjamin Close.

“He gained an accuracy, expertness and efficiency that gave permanence to all of his work and satisfaction to all of his customers,” according to period biographer Leigh Irvine.

Soon Mercer teamed up with Richard Hodgson of Samoa to form the Mercer-Hodgson company. The name changed when James D. Fraser bought into the company, but Mercer’s input remained vital.

“Many of the most substantial homes and stores were erected under his supervision,” Irvine noted.

Mercer also supervised the building of many wharves along the waterfront and construction of the jetty on Humboldt Bar, as well as gained numerous contracts for bridges, tunnels, and track-laying for the Northwestern Pacific Railroad.

In 1893, one remarkable job involved the relocation of a 100-ton Queen Anne from Arcata to Eureka—via barge across the bay. Local newspapers were skeptical it could be done. Yet the Arcata Union conceded: “Knowing Mercer as we do, we are inclined to the opinion that they get there.”

They did. The event even captured the attention of London’s Strand magazine: “The operation,” it reported, “was certainly one of the most picturesque and scientific feats of modern house-moving.”

After the 1906 San Francisco quake, the company expanded to the Bay Area, where Fraser relocated and supervised a plethora of reconstruction work and later the building of part of the sea wall and wharf for the Panama-Pacific Exposition.

Business remained brisk in Eureka. Not so for the mortal Mercer, who died unexpectedly at age 66 at his home on Nov. 10, 1909.

The next day, the Humboldt Standard lamented the passing of “the best-known contractor in the county.”

His company continued with decades of ongoing success. A sampling: Recovering the U.S. submarine H-3 off the sands of Samoa in 1916; constructing of the Humboldt Masonic Lodge in 1921; and building a large addition on the Eureka Inn in 1924; as well as construction of the Veterans Memorial Building on H Street in the early 1930s, Christ Episcopal Church on H Street, the main hangar at Murray air- field in 1937, and the Bank of America at Fourth and F streets in the ’50s.

The Mercer family sold its five houses on H Street by the early 1920s, and they have continued on as homes for decades of families. In 1990, the Mechals family—Hugh, Cheryl and two young children—moved into the former residence of Dr. Clarence Mercer. 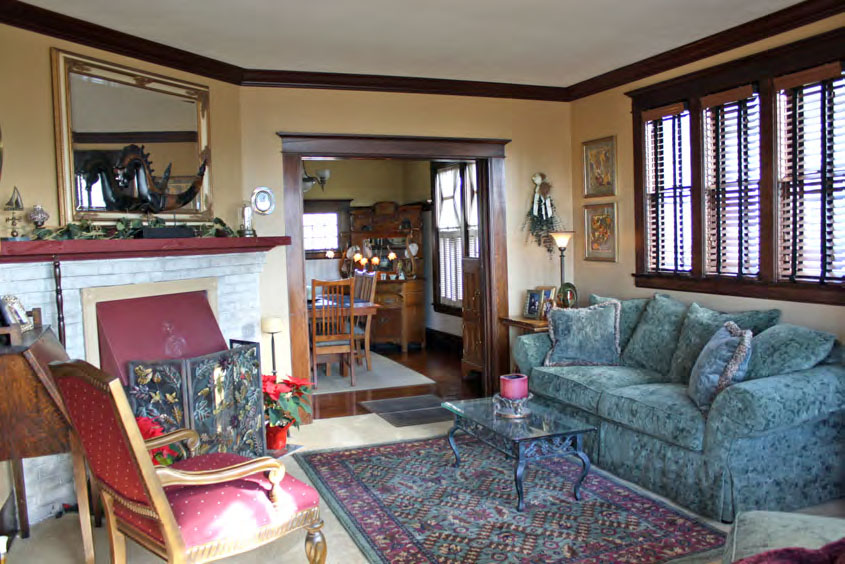 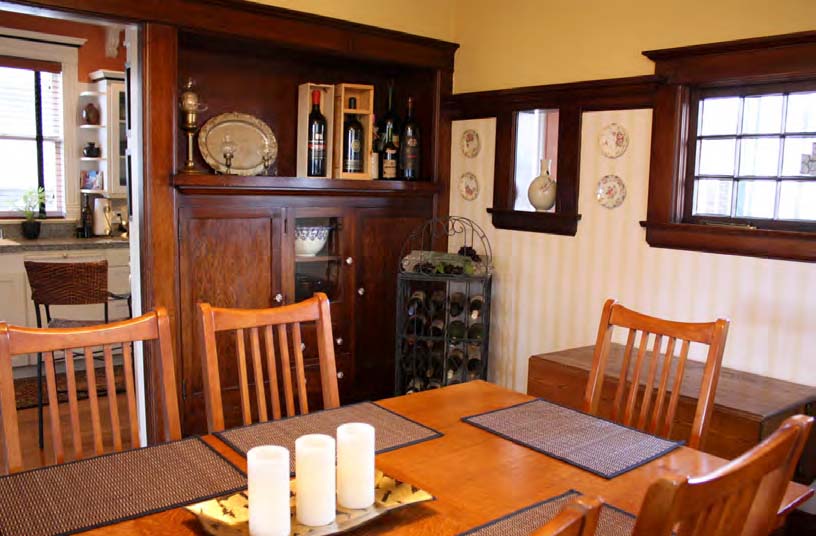 Now the home of the Mechals family, this Dutch Colonial is one of three nearly identi-cal houses built more than a century ago along the 2600 block of H Street for contractor Harrison Mercer. It was the residence of his son, Dr. Clarence Mercer.

The Mechals bought the house from Ron Carter, who had begun needed rehab work on the structure, including new sheetrock and adding period molding. Hugh Mechals took up the work. A painting contractor, he is also an intrepid do-it-yourselfer with a group of friends willing to lend a hand when needed.

“We’ve pretty much redone every single room,” Hugh said. “I’m redoing the closets right now.” Over the years, they have made many decisions, including remodeling in the galley kitchen and bathrooms.

For the Mechals, retaining the home’s historic atmosphere has always been a vital consideration.

In the kitchen, new cabinets were added to match originals, period beadboard and beams were put on the ceiling, and a new floor was laid to match the original wood floor in the adjoining dining room.

Pointing at the doorway next to a gleaming, built-in dining room cabinet, Cheryl added: “I had wanted to open this up more, but we would have lost this beautiful built-in. It would have been too sad to get rid of that.”

Most of the home’s original windows are also still on the job.

“I like the old windows. I hate new windows in an old house,” Hugh said, adding that modern windows are glaringly inappropriate for older houses. “I can see them like that.”

One compromise they made was replacing the front upstairs bedroom windows with modern double-paned windows.

“It was to try and cut down the noise from the street,” Hugh said. “When guests sleep there, they always complain about it. But it’s still loud.”

Of the three nearly identical Dutch Colonials, the Mechals’ house is the largest, thanks to additions Dr. Mercer had made onto the back in 1916. The downstairs portion is a family room, and the upstairs, originally a “fresh-air sleeping room” is now the master bedroom.

On the exterior, the Mechals rebuilt the front porch and also removed asbestos shingles from the siding, revealing delicately shaped scalloped shingles on the second floor.

The rehab project has helped restore the original look to the block, especially the “three amigos,” as Hugh calls them.

The work has been challenging, they both agree, but satisfying.

“We just like the older houses,” Cheryl said. “They have such character.” 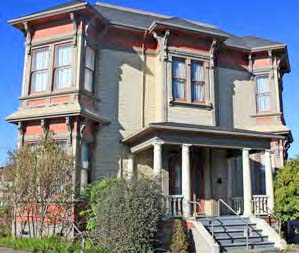 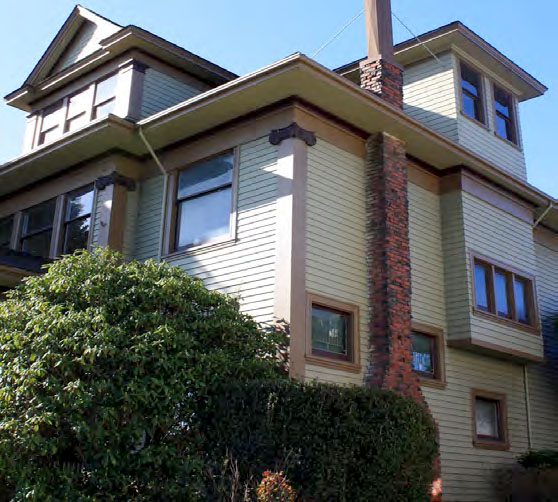 The Lord-Petty House has been re-stored to its former glory.

The elegant, tree-lined garden at 1604 H St. was an overgrown mess when the current owner moved in in the 1970s and restored it. 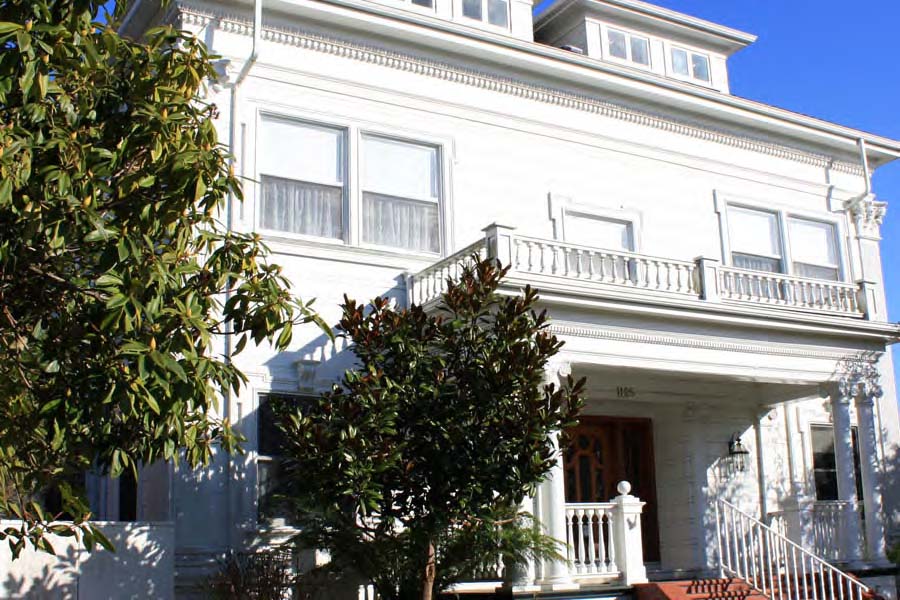 The two Daly brothers’ houses include an elegant Colonial Revival and a striking Craftsman with bold brackets and pointy railings.

Time was everybody who was anybody, lived on H Street…

… So the late historian Martha Roscoe told me 20 years ago. She lived in Eureka for decades—and compiled reams of historical data about the city and its citizens. And she was right about H. Beginning in the late 1800s, the wide avenue was the address for many of the town’s elite.

Two examples are the stately homes of the Daly brothers, owners of Eureka’s biggest department store. Their looming Colonial Revival (1125) and Craftsman (1105) houses caught everyone’s attention in 1905 and 1909. The latter was designed by noted Bay Area architect A.C. Dodge, whose edgy styles are still well-known in Piedmont and Berkeley.

Their neighbors included prominent entrepreneurs, politicians, and doctors as the street was gradually filled with a broad range of popular architectural styles for which the city is noted.

From the beginning, H Street was intended to be important. When pioneer James Ryan drew the first grid for the infant settlement in 1850, he envisioned streets 60 feet wide—with a few exceptions. H, I, J, Fourth and Fifth streets were designated at 75 feet.

Back then the future H Street was dense forest. For the city’s first three decades, the residential development of the boulevard largely stopped after the Seventh Street intersection, thanks to a deep gulley. Only a few houses, like the Greek Revival at 2103 H St.—still surrounded by trees and stumps—were to be found by an indirect route around this gaping hole.

By the late 1880s, the gulch had been filled, and the grading of the street continued. Eventually, the city’s horse-drawn trolley was making its way up H Street past posh Stick-Eastlakes, including that of the mega wealthy Thomas Ricks at 730 H St., as well 1604, 903 and 1104 H St. The latter two were constructed by members of the Butterfield family, who built several noteworthy structures on H, including a “handsome residence” for prominent businessman and politician Richard Sweasey at 804 H St. in 1894. This house was kitty-corner from the home of physician/surgeon Reuben Gross and is now home to the Humboldt County Historical Society.

In 1905, jeweler Charles Wright and his artist wife, Cora, moved into their towering Dutch Colonial at 1230 H St., and four years later a another looming 2½-story Colonial Revival a block away went up for the superintendent of public works, Oscar Lord, and family.

More eye-opening styles were on the way, including the return-to-nature Craftsmans, along with a slew of post-World War I period revivals. In 1936, construction began on the fanciful Medieval Revival at 1506 H St. for Joseph Ramaciotti, the new sales manager for Roma Bakery Products. The end result remains a “visual effect quite convincingly like a fairytale illustration.”

In 1940, Dr. Sam Burre—local physician and gifted amateur architect—brought his special flair to the corner of H and Buhne with the sophisticated Streamline Moderne Parkside apartments.

The middle and latter 20th century brought changes on H Street. The area wasn’t quite as fashionable, and the old houses were seen as dated. Many were turned into apartments.

In more recent decades, that trend has been slowly reversing, at least in part, says Chuck Petty, who lives with his wife, Wendy, in the 1909 Oscar Lord house. The Pettys bought the house in 1994, and by then it was a shambles. The couple’s years of ongoing, diligent restoration efforts have brought it back from the brink.

H Street has many success stories. Debra Crowley and her family moved into 1604 H St. in the early 1970s. The 1887 home of pioneer lumberman Albert Thompson, the house became the longtime residence of his daughter, Gertrude Thompson, the principal of Lincoln Grammar School. It was still in good shape by the time the Crowley clan took up residence. The same could not be said for the overgrown side yard.

“The yard was a disaster,” Deb recalled the scene crammed with weeds. After much clearing and digging, a horticultural jewel began emerging.

“Apparently it had been an English tea garden,” she said. “I was finding huge ponds and lots of walkways.”

Debra brought the tree-rimmed garden back to lush life, and most recently framed it with period wrought-iron fencing, a graceful complement to the superb, intricately detailed Stick-Eastlake home.

The effort was worth it. The old house and its environs, Deb said “just mean everything to me.” It seems a lot of everybody-who-are-anybody- type folks still live on H Street.

In 1893, Harrison Mercer supervised the relocation of a 100-ton Queen Anne house across the bay from Arcata to J Street in Eureka. It still stands there today.

The Barnum House on H Street in the early 20th century.