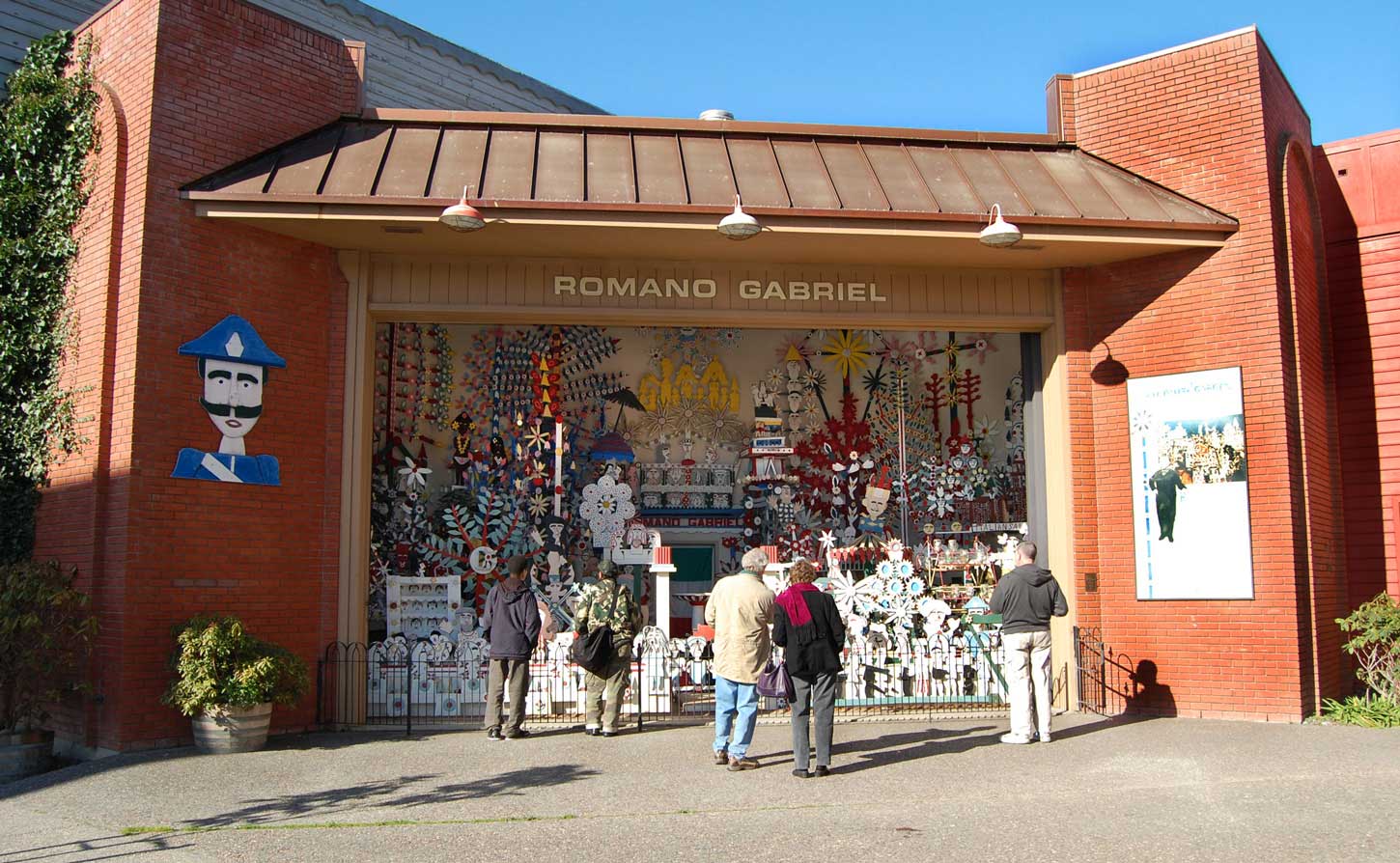 A true Eureka treasure, the incredible Wooden Sculpture Garden of Romano Gabriel is preserved at 315 Second Street in Old Town Eureka. Under the loving care of the Eureka Heritage Society, this unique contribution to the world of folk art continues to delight visitors and residents alike. The links on the right are to several recent Times-Standard stories and articles on additional Eureka Heritage Society Website pages to cover the history of the garden, show some photos of the art, and describe current efforts to provide a “facelift” to the exhibit.

Romano Gabriel was born in Mura, Italy in about 1887 and worked with his father as furniture maker before setting off for America in 1913. Soon after his arrival in the United States, the artist served in World War I, then settled in Eureka where he worked as a carpenter and gardener, and built at least six houses. He was known as an introvert, possibly using his “pictures” as his communication with the world. Romano Gabriel died in 1977, ten years after he added the final touches to his wooden works. The day he died, notification arrived from the California Arts Council that the Wooden Sculpture Garden had been designated an important piece of folk art.

Many of the original pieces in the Sculpture Garden were cut with a hand saw. Later the artist used a small electric saw as he worked in the small shed in his yard, peeking out secretly to observe the people who stopped to see his work. Romano Gabriel’s models emerged from memories of his travels and his homeland, as well as from his favorite magazines. And, he apparently saw his wooden garden as a propaganda instrument rather than purely as an object of artistic expression.

While many trees in the garden seem purely decorative, others embody their curator’s attitudes about society and its institution, and his reactions to public events. Gabriel’s dissatisfaction with the Pope for instance. There is a long American tradition of Sunday painters, hobby artists, and do-it-yourselfers. Most of these create work more distinguished by its quantity than its quality, but occasionally folk art is produced which by the originality of its ideas, the freedom of its fantasy, and the nature of the commitment of its creator, transcends the category of the amateur. California possesses two such outstanding and internationally known examples of such folk art: Simon Rodia’s Towers in Watts, and Romano Gabriel’s Wooden Garden in Eureka.

As the years passed, Gabriel’s garden grew until it almost completely obscured his house, and became a tourist attraction gaining national and international attention. Photographs of the sculptures have been exhibited at Harvard and M.I.T, as well as in the magazines Architecture Plus, Art News among others, and in the book All Their Own. Pieces have toured Europe and have been exhibited at the San Francisco Museum of Modern Art.

After the death of its creator, the Wooden Sculpture Garden sat alone for several months, its fate uncertain. The Ray Vellutini family of Eureka purchased it from the estate, and twenty year old Vince Vellutini, sometimes aided by friends, spent almost a year restoring it. Now, through the efforts of the Vellutinis, the Eureka Heritage Society, the City of Eureka, and by a grant from the Humboldt Area Foundation, as well as through generous individual donations, a permanent home in Eureka’s historic Old Town is possible for the Wooden Sculpture Garden of Romano Gabriel.

It took Romano Gabriel, a carpenter and gardener, nearly three decades to make the hundreds of of brilliant and arresting objects with which he filled the front yard of his Pine Street home in Eureka. Gabriel fashioned his brightly painted trees and flowers out of vegetable crates, adding droll faces and figures to create a fantasy that dazzles and delights like the finale of an old-fashioned Fourth of July fireworks display–pinwheels fixed but appearing to spin in a triumphant breathtaking burst. Unlike much other naive art, the Wooden Garden was not made from found objects, or arranged in patterns; nor was it a structure intended for real or imagined use. It was, rather, a seeming jumble of objects; taller in back, smaller in front; set up in the approximately thirty by sixty foot yard, behind the picket fence, and intended to be seen by passersby. According to a longtime friend (of the artist), some of the figures were commentaries on contemporary people or events, political or religious, or even caricatures. Some of the pieces were animated by motors.